I know, I know, of the cup that cheers but doesn’t  inebriate;

But the world cup sure gives no cheer for some close affiliate
For those that know and see, and get conditioned to the game
Its misery and sorrow I heard, and what to speak of shame ?
For the world Cup that may chee, is sure not writ on their fate ! .
Oh ! come on,  its all in the game, said one, a wager won;
While another, who knew naught – a village idiot, told his son:
“My God ! why all the kicks and fights over ONE ball !
Can’t I donate, a player, a ball, and send them back happy as all ?
Will that not end the strife & ill feeling over that ONE goddamn ball ?”
I wish the world cup was so simple.
In my younger days , my eldest sister often quoted :
Yes if wishes were horses, beggars would ride
& If turnips were watches I’ll wear one on my side !

But die hard gamers will say the game has become simple as ever. Thats all we can take in this iron age. Adult, muscular and athletic men kick around a small airy ball and cry over missed posts and nets, while a whole nation can swoon, exult or drown in depression.

Gone are the Greek olympic style bravado and courage  or the gladiators’ real life games of grit and survival. The ‘Human’ now is weak ,  a resource , not much of a ‘being’ and the game too – proportionately lighter ! – Just a ball and a post could send countries of men and women reeling through deep emotion, elation and suicide ! And all that , for one bouncing ball on the field ! Now thats a serious way to look at a game of football and maybe George Bernard Shaw saw it that way too when he quipped about cricket being played by 22 fools with 22,000 fools watching !

Some others would say – Come to think of it, games are meant to cheer us !  After a hard days work, to return to a vicarious participation on TV or from the gallery, is a great cleanser and refresher , its not real, man !  Then why all the hullaballoo one may wonder ! . But the fact is that the serious repercussion on the vicarious participants seem worse than those on the real game with the real experience out there. Some cannot take it easy !  So which one is more real or the most real or just full reality ?  – The one on the field or the one we are vicariously experiencing ?

Over possessions as trifle as a ball , there are wars and skirmishes in this world. We are simply hapless/helpless instruments of a higher force, as we fight and wrangle meaninglessly for ephemeral possessions that fade before our eyes. Yet there is a substance that misses our attention, slips through our fingers and we search, chasing it in the will o’ the wisp.
The game of life is taken less seriously as the material energy kicks us around the field of the world, because we know not how it works.  The Gita also tells us that the fools cannot see but the one who is educated can see. Vimudah nanupasyanti pasyanti jnana caksusah (Bg . ..).

In the game of life, we are playing with material nature as our constant unseen opponent – a formidable one at that. mama maya duratyaya – Krishna says in the Gita . For those who don’t see it, there is no game to play.  They are being played upon and are forced to respond . 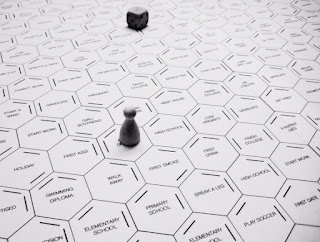 For those who are trained to see the game of life with the opponent, life becomes exciting and full of surprises – an adventurous journey into the insides of the self. Gathering knowledge on the subtle nuances of the game, and about the field with its many land mines, pitfalls and traps, the serious player can be successful for sure in scoring the goal.  He gets to know the opponent first,  and also her sponsor or owner. He discovers that those whom he thought are his best mentors and coaches are actually his worst enemies – For eg. the mind.  Attendant on the mind are its cohorts, lust, greed, anger and envy. This field is called Kshetra in the Upanishads and the intelligent player on the field is known as the Kshetrajna or the knower of the field.
The trick is to hold on to the sponsor to tide over these powerful enemies.  as the sponsor Himself advises in the Gita : daivi hi esa gunamayi mama maya durtatyaya . . . . mam eve e prapadyante maya etam transit te  . . . .  The interesting implicit offer is that the sponsor is ready to sponsor your victorious exit, if you can submit to His sponsorship in playing the game .
Sounds familiar ?  No ordinary match fixing this !
Yoga is the play on the field, by the intelligent player who knows the field and the players and himself by cultivated knowledge and realisation. He scores goals of victory and moves ahead in the game of life.  He plays in real time in the real world, while others scream emotionally in their make believe world of apparitions, side by side.  Its played parallel always, and is constantly on .
Some win the make believe game and take home trophies and sheilds only to loose the real game of life and devastate themselves in illusion and ignorance. While some other veteran real life players loose the make believe games in the world of illusion only to score victory in the ultimate game of life – Death .

Gita Wisdom teaches us how to play the real game of life and be winners.  Both sides win – its real win/win !
Real Football anyone ?
Bhakti Vinoda Swami